A few of our recent acquisitions

Pewter flower dish from WMF with the original green cut glass removable liner. So Art Nouveau, with its flowing outline, featuring an openwork whiplash design framing leaves and berries of ivy. Originally electro-plated but most… 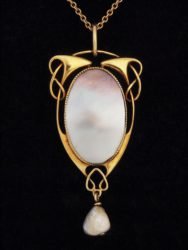 Art Nouveau pendant in 15 ct. gold by Murrle Bennett & Co. circa 1900. An elegant and timeless design with a fluid outline featuring gold wirework fashioned into an entrelac design, framing a splendidly contoured… 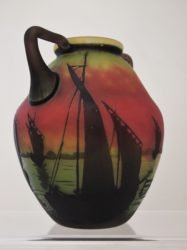 Fishing Boats at Sunset by Daum

Cameo glass vase by Daum decorated with fishing boats, their sails silhouetted against an evening sky. A very effective contrast with the dark shapes and their reflections in the water set against the green and… 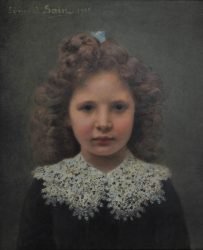 Portrait of a Young Girl by Édouard Sain

Quite delightful oil on canvas portrait of a young girl, perhaps no older than seven or eight years of age, painted by the French artist Édouard Alexandre Sain (1830-1910). Dressed in her Sunday best clothes…

This iconic sculpture by Jean de Roncourt, which is arguably his most admired work, is more usually seen in spelter. However, a much smaller number were cast in bronze and this particular piece is a…

Most of his career was spent moving between France and Egypt, the latter being where he painted his well-known Orientalist paintings.

This is an example of his genre work, showing as it does a moment captured in a quiet rural village somewhere in France, with a woman standing by a doorway holding a small child in her arms and another two young children close by.

Behind the girl sitting on the edge of the pavement can be seen the window of a shoe shop that presumably is owned by the patriarch of the family.

Somewhat looser in style than many of his paintings, this is a delightful image executed on a late summer’s day with the leaves on the roadside tree just beginning to colour.

Tell A Friend About 'Street Scene by Theodoros Rallis-Scaramanga'